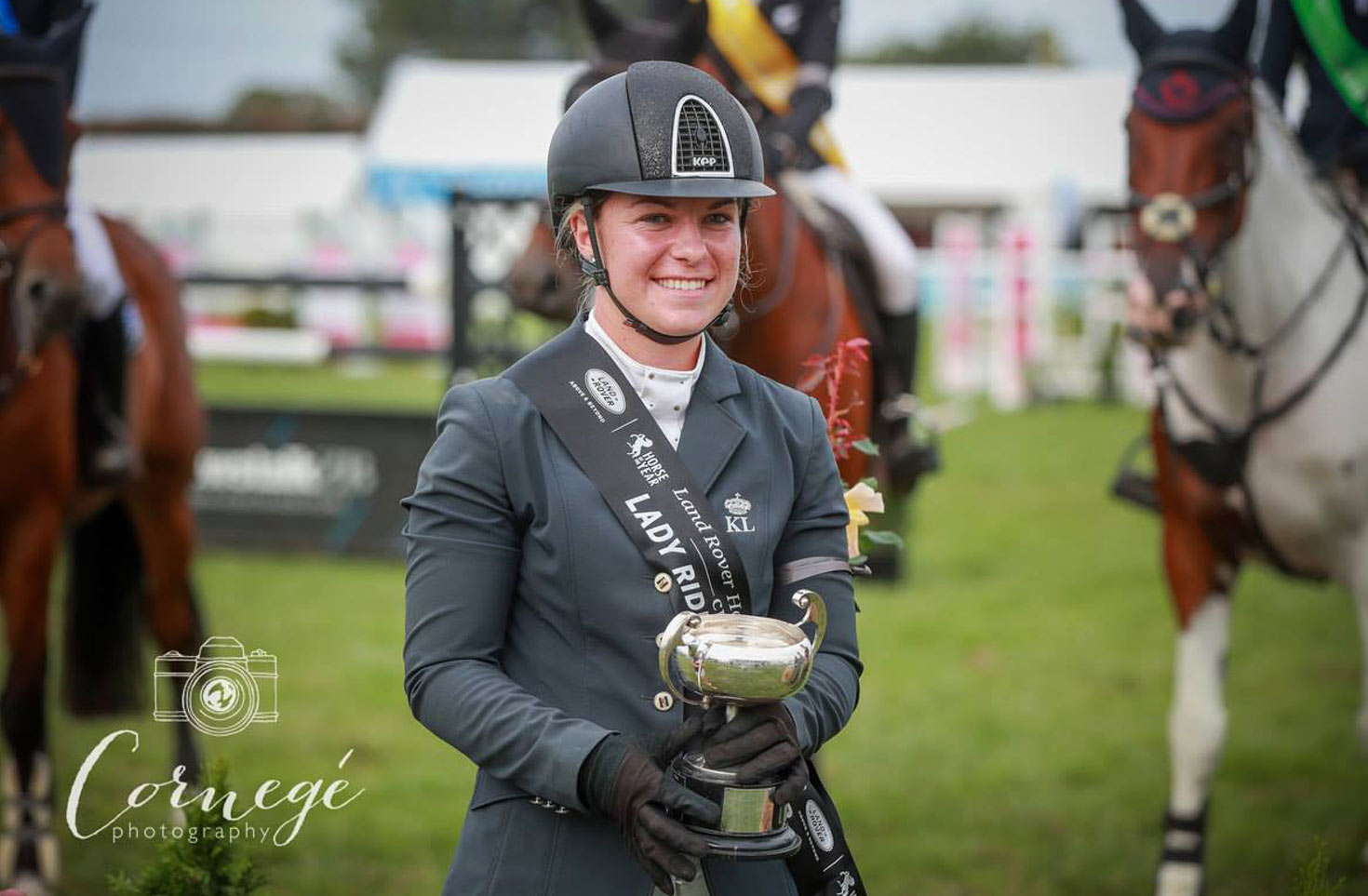 The main classes today were the GJ Gardner Pro Am Final and The Ultra Mox Lady Rider of the Year Final.

For reports on these two classes as well as placegetters in all other classes held today, please continue reading.

The top six placegetters in this championship were:

The second jumping class on the Premier Arena today was the Pro Am Final. Sponsored by GJ Gardner, a total of 31 combinations were entered, of which seven recorded clear first rounds. The fastest of these was Vicki Prendergast and her 6-year-old mare Selena C in 78.4 seconds, some four seconds ahead of the next fastest.

A seven-way jump-off was led off by Grace Percy and Kiwi Spirit. A single rail and a time of 52.55 set the benchmark for the rest of the field. The defending champion in this class, Sally Clark and Victorias Secret also took a single rail towards the end of their ride, however, with a slightly slower time, they slotted in behind Percy in the provisional placings. Third out was Kylee McCambridge and Chicago who followed the pattern by taking a single rail but in a time that did not threaten the leaders.

The fastest first round combination of Vicki Prendergast and Selena C were next in the order. They rode magnificently, mastering the course with a clear round and in a time (53.36 seconds) comparable to those who had gone before them. Prendergast had the lead with three more combinations to ride.

Siobhan Ryan and Natalie also had a great round. They were quick and precise and certainly looked like they could steal the lead from Prendergast as they strode towards the last. However, the last rail on the oxa, was clipped and fell, which, due to their fast time (53.66 seconds), relegated them to third for the time being.

Penultimate pair, Lucia Voss and Ngahiwi Para took a rail midway through the course, after which they noticeably quickened the pace, however, they finished with just the 4 faults, but not on the podium.

Last out was the Takapoto Estate rider Jamie Campbell and her 8-year-old mare Lanice can de Heffinck. They knew that only a clear round would be enough to win and the time had to be fast as well. They were looking good until about the half way mark, when they took rails at two consecutive jumps to crash out of the placings.

So in the end, being the only combination to go double clear, Vicki Prendergast and Selena C were deserved winners. Not only did Prendergast ride the horse, but she bred it and co-owns it with Michael Prendergast, so it was a great all-round effort from her. 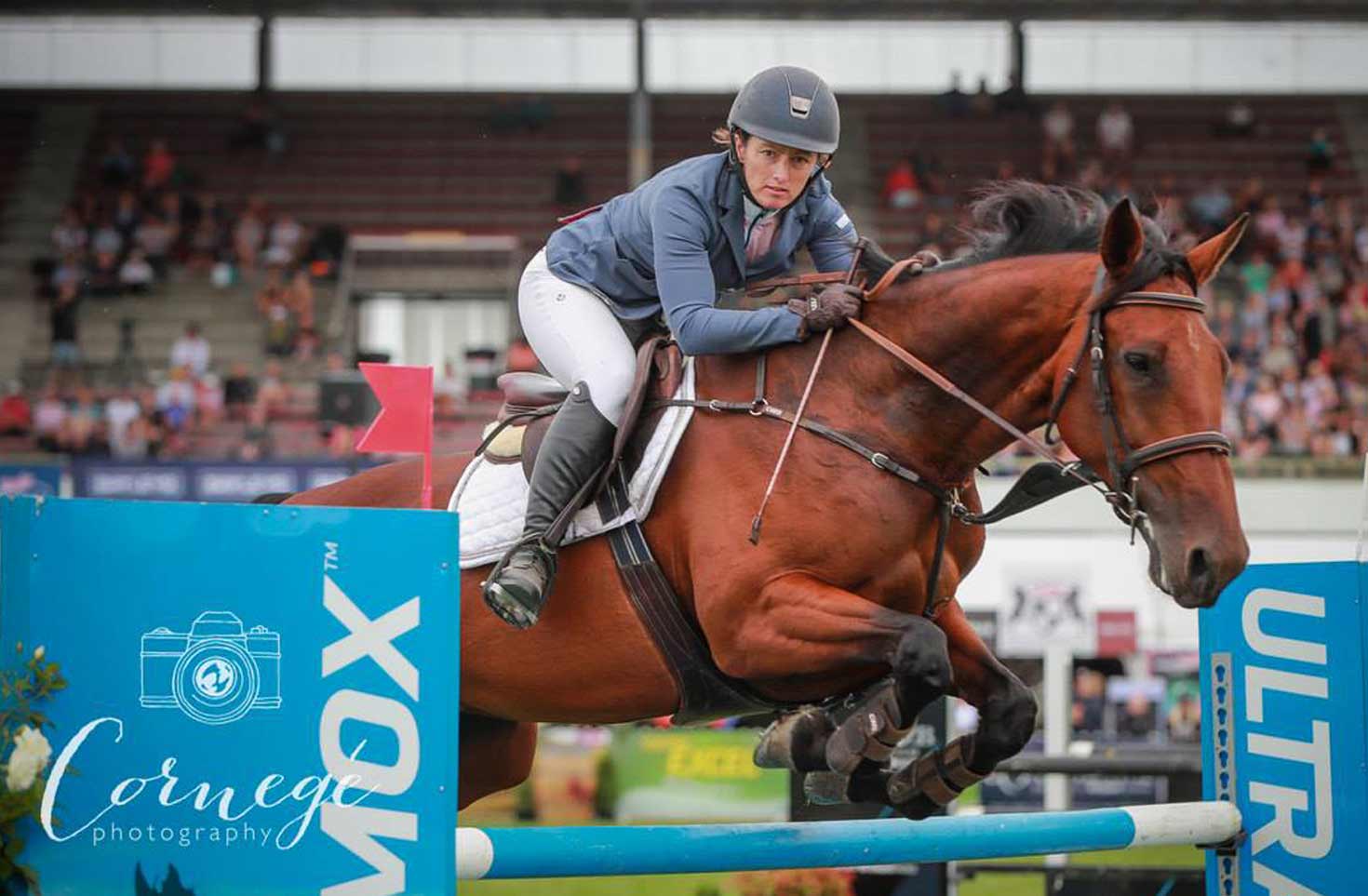 The final jumping class today was the Lady Rider of the Year Final. A total of 29 combinations were entered for this final and with only the top eight performing combinations going through to the second round, the pressure was on from the beginning.

A total of four clear first rounds were recorded, the fastest of which, by Mikayla Herbert and Grand Caballo in 84.06 seconds. She was joined in the second round by the other 3 clear round combinations, another combination with just a single time penalty and the fastest three four-fault combinations, however, with first round faults being carried through to the second round, these three were now at a clear disadvantage.

Fourth to go was the all-conquering Tegan Fitzsimon and Double J Monarch. They carried through just their single time penalty from Round 1 and by going clear, they did not add to this and settled into the provisional lead. Now there were four combinations left, all starting on zero penalties, however, each knew that the slightest slip-up would place them behind Fitzsimon who was waiting to pounce.

First of these four was Jasmine Sketchley and her stallion Bravado Ego Z who took a rail at the fourth to relinquish any chance they had of winning. Sarah West and Oaks Centurian were next, but again, a single rail, this time at the first jump, meant they were going to finish in the minor placings.

Second last out was last year’s young rider of he year, Emily Hayward and Belischi HM . They took an early rail and elected to withdraw from the round.

This left just one more combination, Mikayla Herbert and Grand Caballo. Nothing short of a clear round would be enough. By the time they had got to the double, the crowd was cheering as they cleared the jumps. Finally, they headed towards the last of what had been a slow and, to date, clear round. As they approached the last, the large crowd that had gathered were excited, not only to see if they could complete the round clear, but would it be under the time allowed? As they successfully cleared the last, all heads turned towards the clock. With an allowed time of 72 seconds, Herbert and Grand Caballo had taken just a tick over 70 seconds, which was more than seven seconds slower than the next slowest round 2 time, but they had done enough. It turned out to be a perfectly judged round and being the only combination to record double clear, they were the deserved winners. Tegan Fitzsimon and Double J Monarch took out second place and Nakeysha Lammers and Resolution filled out the podium.