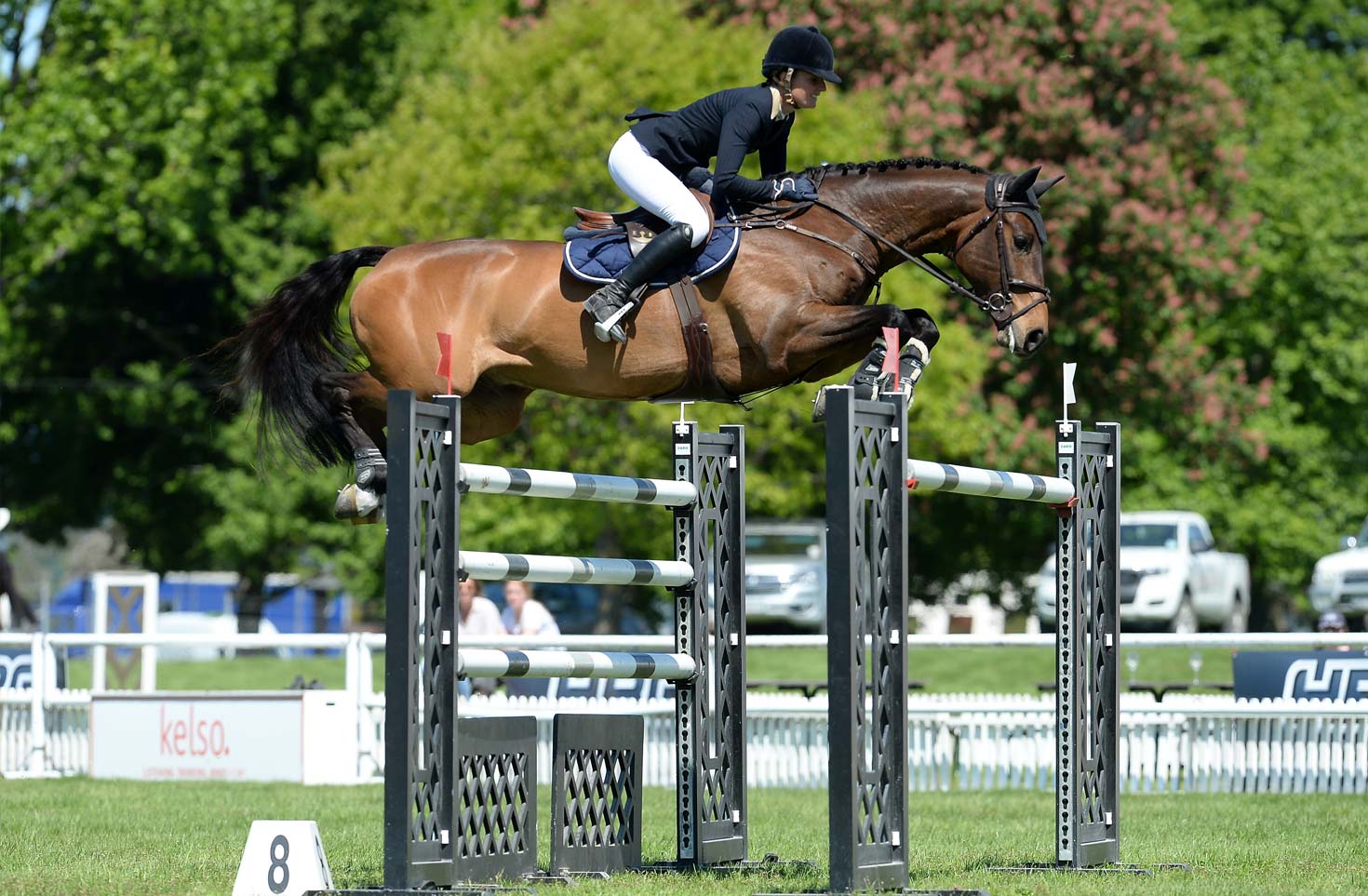 Tegan Fitzsimon has laid the challenge for others to follow after a solid win in the opening round of the POLi Payments FEI World Cup New Zealand Series at the Hawke’s Bay A&P Show in Hastings.
The 29-year-old from West Melton, who has won the World Cup Series for the past two seasons, headed home a talented 12-strong field to take the honours in the two-round competition over a challenging course designed by Roger Laplanche (Timaru).

There were no clears in the opening round, with five combinations carrying their faults through for the second round. The first of the double, which was right beside the hospitality tent, proved the bogey fence for many, with nine of the 12 starters having it down.

In the second, current Olympic Cup holder Brooke Edgecombe and LT Holst Andrea were all clear but carried through nine penalties from the opener to take third place. Tegan and Windermere Cappuccino were also clear but picked up a single time penalty to finish the two rounds on five faults. Taupo teen Annabel Francis, in just her second World Cup start, had a rail with the feisty little grey Carado GHP to finish on eight faults and second place, with Logan Massie (Dannevirke) and his new stallion Bravado Ego Z adding to their tally to end the competition on 15 faults and in fourth. Briar Burnett-Grant (Taupo) and Fiber Fresh Veroana also finished on 15 faults but with a slower time to fill fifth place with Samantha McIntosh (Cambridge) and Takapoto Alaid de Chez Nous, who opted not to come back for the second round, finishing sixth.

The three women on the podium were all very pleased with the efforts of their horses. Eighteen-year-old Annabel was quick to praise her horse. “He was just amazing,” she said. “I am very pleased, especially as this is just our second World Cup ever.”

Brooke was happy to get the opening round out of the way. “I was really pleased with Andrea in the second round – she jumped that very well. It was a good course out there from Roger.”

But the day belonged to Tegan and her little coffee horse, as Windermere Cappuccino is known. “When I looked at that course I thought it would really take some jumping but didn’t expect that many faults (from the field),” she said. “It was a big track for an opener.”

She felt her horse had jumped the second round far better than the first. “It was similar to last year though, with no clears in that first round then either. My plan was just to go clear in the second – I wasn’t worried about the time. Last season I also had four in the first and went for a fast time in the second and paid the price with a rail – I wasn’t going to let that happen again!”And despite coming in as a hot favourite with her back-to-back World Cup Series wins, Tegan says she wasn’t feeling too much pressure. Their win today was their fifth World Cup victory.

“The fields are so strong this year – everyone is good enough to go out and win, so it will just be the best on the day,” says Tegan.
Her love for her horse is palpable. “He is just that once in a lifetime horse. He only knows me and we know each other inside out. Partnerships like this are hard to come by, and it takes time to build that. He has just been phenomenal his whole career.”

Tegan has based her team in Te Aroha with the Sheehan family, whose son Rylee won his first Country TV Pony Grand Prix this afternoon aboard Tony the Pony as the only clear in the opening round of the 11-strong class.
Today’s World Cup round was the first of six being held across the North Island, with the top four counting towards overall standings in the series. The next leg is at Hawera next month. The winner of the New Zealand league usually has the chance to represent the nation at the Longines FEI World Cup Final which is scheduled to be held March 31-April 5, 2021, in Gothenburg Sweden, but with a global pandemic whether it goes ahead or not is uncertain.