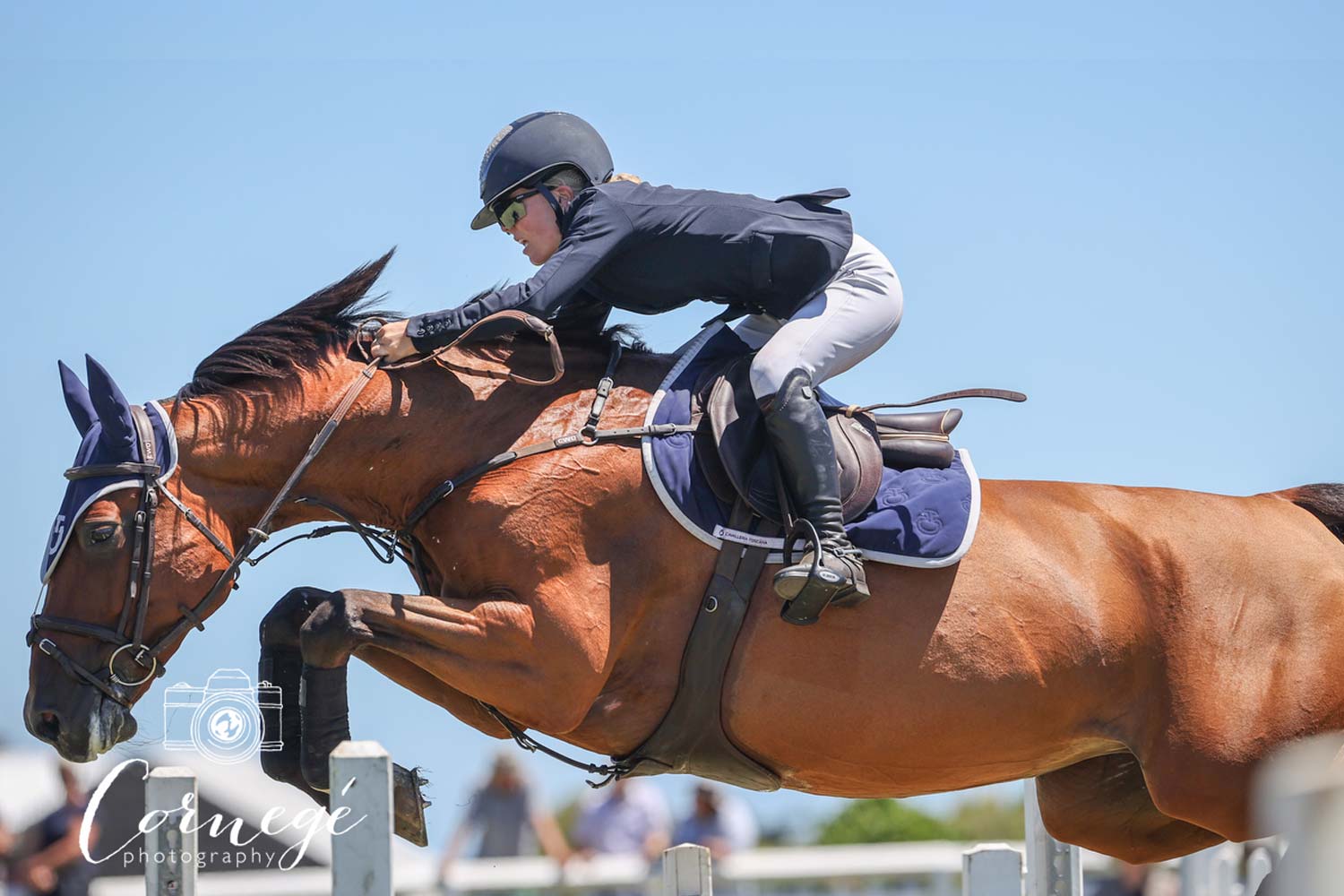 Annabel Francis’ winning roll continues, this time taking the quinella in the North Island title in the POLi Payments Premier League at the Egmont A&P Showgrounds in Hawera.

The Premier League is the most prestigious of the show and didn’t disappoint with 18-year-old Annabel the star of the class with her two double clear rounds aboard her imported horses Carado GHP and La Quinara.

Eight of the original 12 starters came back for the second round with Annabel with both her mounts and veteran Maurice Beatson (Dannevirke) aboard Central Park on zero faults. Clears in the second round came again from young gun Annabel with both her horses, with La Quinara ahead of Carado GHP, as well as Robert Steele (Dannevirke) aboard LT Holst Bernadette to give him third place. Maurice picked up fault faults in the second but with a slower time than Robert, was relegated to fourth.

Annabel said winning the top class was certainly a goal for the show and she didn’t mind which horse came out on top. “They both felt really good in the warm-up and we had a good run into today,” she said. It is the first time she has won the premier North Island crown but comes on the back of a purple patch for the teen who earlier in the month won the FEI World Cup NZ Series and final. “This win is really special especially as we head into Takapoto Estate Show Jumping and the Land Rover Horse of the Year Show . . . and if I do get to go to the World Cup Final in Sweden.”

It was a lovely flowing Pip Howells-designed course today that seemed to suit the experienced combinations in the field.
“I thought the course was nice – it wasn’t too big but was technical enough that there were a lot of rails coming down in different places.”

Annabel admits to feeling a little more pressure to win these days but she doesn’t let that get into her head. “I am a pretty calm person, so it’s ok,” she says. She’s also got coach Jeff McVean with her too. “He is certainly a calming influence to have around.”
Annabel also won the Matthews Hanoverians Seven-Year-Old North Island Championship (sponsored by Greymouth Petroleum) aboard Chic Xtreme earlier in the show.

Eighteen lined up in the Country TV and Jude Watt Memorial Pony Grand Prix North Island Championship with nine combinations, on eight faults or less, coming back for the second round. The opener produced clears from Georgie Wilson (Taupo) aboard Showtym Boss, Rylee Sheehan (Te Aroha) with Tony the Pony, and Penny Borthwick (Wairarapa) on Foxdens Merlot.

In the second, only Georgie could keep a clean slate to take the win with a smart double clear in 51.23 seconds. Madison Jackson (Pukekohe) and Rednalhgih Cowan were also clear with the fastest time of the round, but carried eight faults from the first to settle for fourth. Rylee and Penny were second and third respectively with their four-fault rounds.

The hotly-contested FMG Young Rider (sponsored by Egmont Horse Coaches) North Island Championship was won by Georgia Bouzaid (Cambridge) aboard AP Ninja whose speedy double clear sealed the deal. The top five were all double clear with Georgia stopping the clock at 45.88 seconds, just ahead of Annabel Francis (Taupo) aboard LT Holst Elizabeth who came home in 46.32 for second. Current Young Rider of the Year, Briar Burnett-Grant (Taupo) and Fiber Fresh Veroana were third in 46.79 seconds.

Melissa Berridge and Onetai Fire and Ice were the winners of the Taranaki Equestrian Pony Points Prize, riding off with the  John Henry Cup. John Henry was renowned throughout the North Island in the 1970s and 1980s as a top eventing and showjumping pony. He was owned by the Atkinson family from Taranaki with the cup presented for the past 25 years to the leading local rider across a number of shows, starting at Waverley A&P in November, through the Egmont A&P, the Stratford A&P, and culminating with the Taranaki Jumping Area Show.
Results –

For full results, head to www.equestrianentries.co.nz .