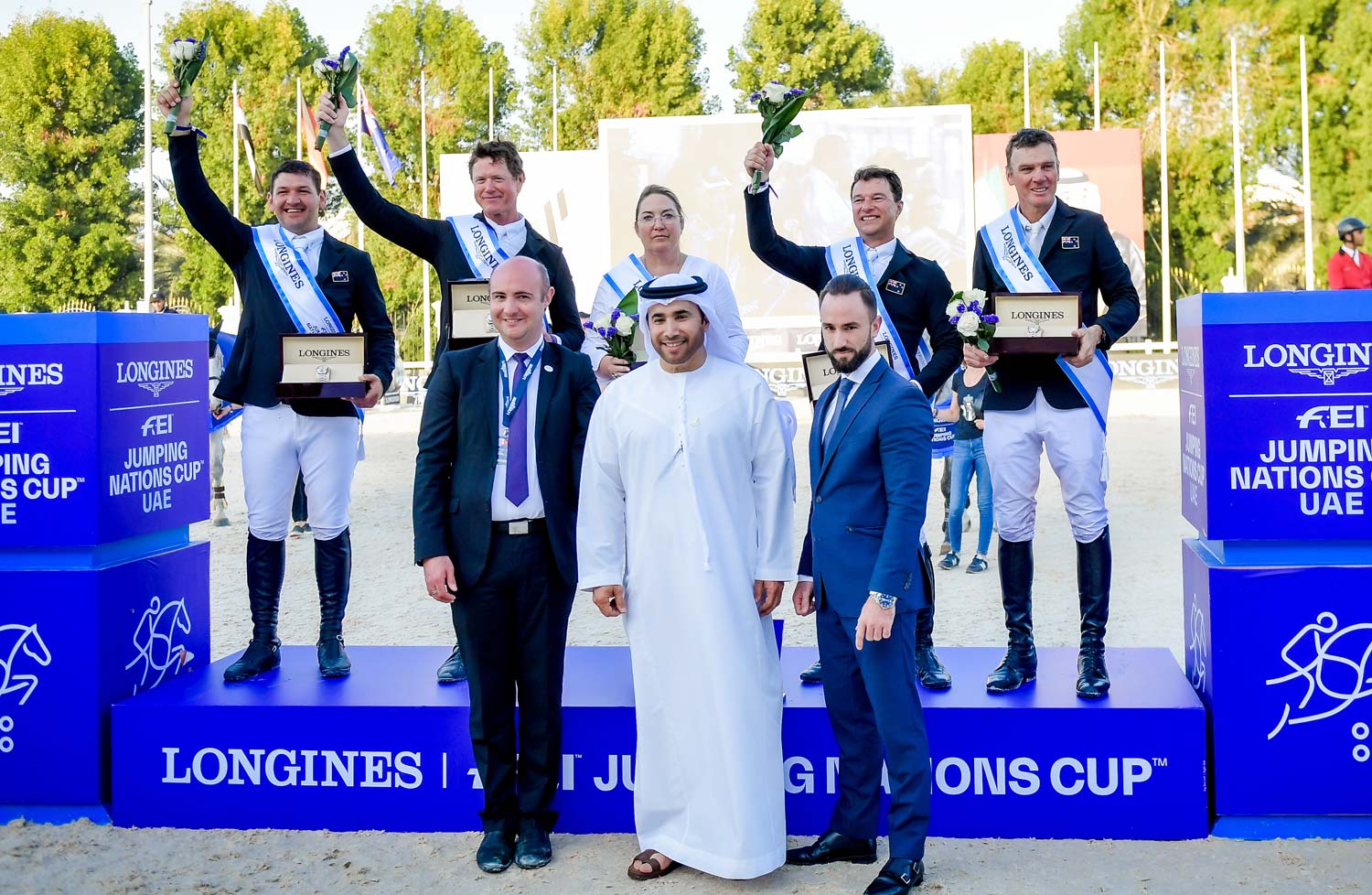 It was two from two for our Kiwi showjumpers who snatched another slice of history with back to back wins in the Longines FEI Jumping Nations Cup in the UAE on the weekend.

Daniel Meech and Cinca were the only double clear, with Tom Tarver aboard Popeye and Bruce Goodin on Backatorps Danny notching a clear in the opener followed by four faults in the second. Richard Gardner and Calisto had an unfortunate parting of the ways in the first round.

The trio of clears in the opening round saw then tied at the top with the UAE going into the second. In the end New Zealand edged out Egypt by four faults from the best three rounds, to take the win, followed by the UAE, Germany, Syria, the Kingdom of Saudi Arabia.

The Kiwis were ecstatic. Bruce was absolutely thrilled to win again in Abu Dhabi. “It is pretty awesome to be able to come back and win it for the second time so we are obviously all very happy. It was a good competition.”

In the second, both Bruce and Tom each had the same rail down, putting all the pressure on Daniel to go clear. “We knew we had won when he went clear.”

Daniel was full of praise for his horse. “Cinca was a complete star today, jumping an awesome double clear to secure the win for New Zealand. I am so proud of her in her first Nations’ Cup. She has really stepped up to the plate, anchoring the team. This topped off a super week.”

Daniel said it was great to see Tom do so well as the newbie and Bruce who led the team with the opening clear. Cinca had thrived in the heat and the conditions had been near perfect for the team.

Tom felt his grey gelding Popeye had been super. “Our aim was to do two solid rounds for the team,” he said. “After Richard’s unlucky start it added pressure to the rest of us to make sure we had solid rounds,” he said, adding a huge thanks to Kim and Greg Best for breeding “such a star”.

Richard was “gutted” to be eliminated in the first round. “Calisto was in top form here and I was hoping for a good result for the team. He has a few bumps and bruises but he will be ok. The other guys were just brilliant, especially with only three scores,” said Richard. “The whole week has been great and we are all just exhausted but happy.”

Both Daniel, Bruce and Richard were in the New Zealand team that previously won the Nations’ Cup competition in the UAE in 2018. Today’s competition was the second round of the 11-leg Longines 2020 series and was the single qualifying competition for teams in the Middle East region. After a spirited battle filled with plenty of drams, the UAE and Syria have made the cut to the final in Bacelona in October.