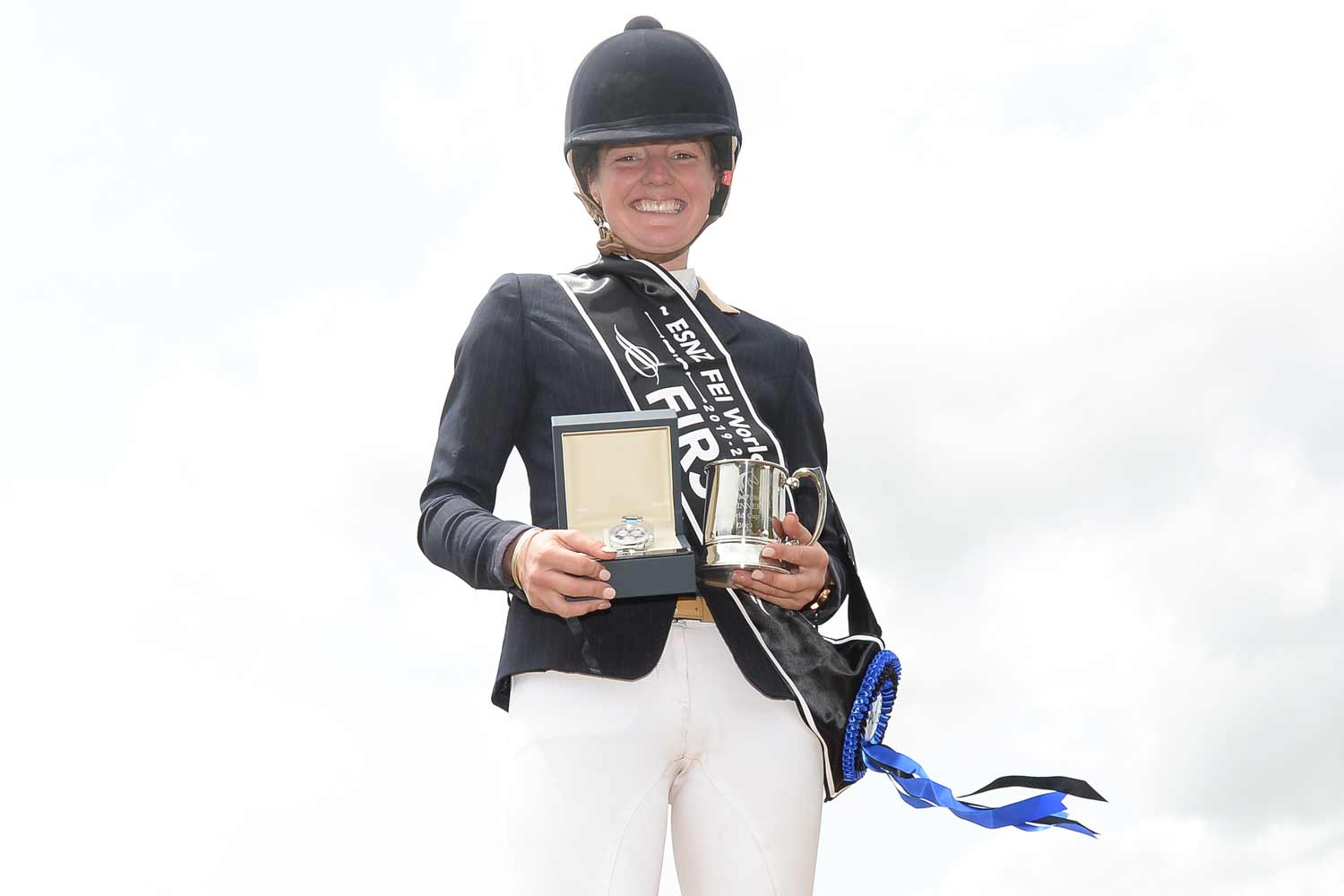 Tegan Fitzsimon and Brooke Edgecombe showed their class once again today as they topped the FEI World Cup NZ League in Dannevirke.

Tegan (Christchurch) and Windermere Cappuccino notched back-to-back wins in the POLi Payments FEI World Cup Series at the Goldengrove Stud Central and Southern Hawke’s Bay Showjumping, with Brooke (Waipukurau) aboard LT Holst Andrea bagging a consecutive win in the final. Each rider finished runner-up to the other in the respective divisions.
But it wasn’t without more than a few heart-stopping moments with both the final and the series coming down to the wire. Nine combinations were challenged by the Gary Sinclair-designed course which for those clear in the opening round, would give them a Certificate of Capability towards the Tokyo Olympic Games. 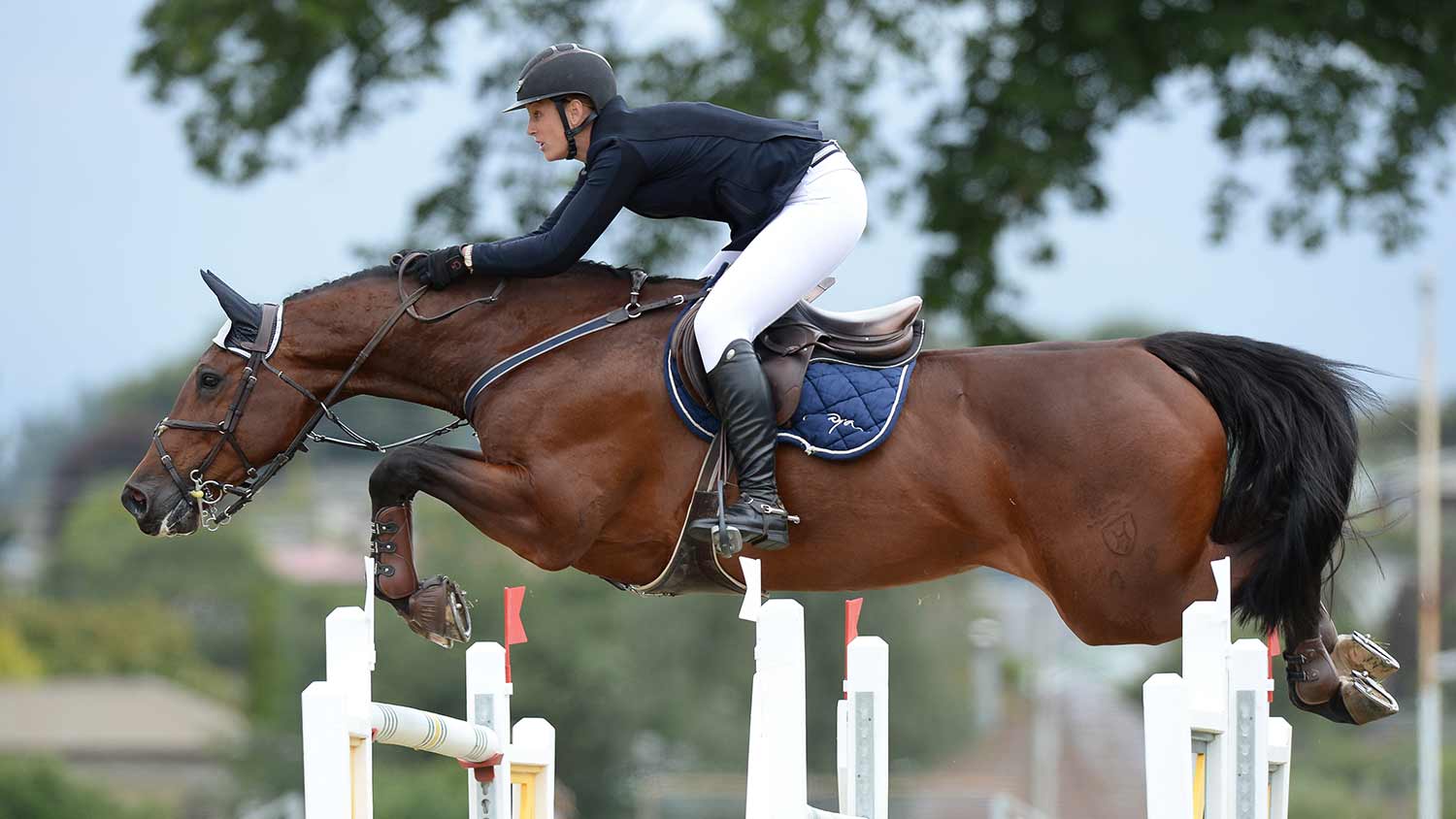 Taupo teen Annabel Francis got the final off to a cracker start. In her first-ever World Cup debut, she guided the experienced Carado GHP to a stunning clear. The next clear came from local farmer Logan Massie aboard Intellect, and then the three at the top of the leaderboard – Briar Burnett-Grant (Taupo) on Fiber Fresh Veroana, Brooke aboard LT Holst Andrea and series leader Tegan with Windermere Cappuccino. Joining the clears back for the second round was Drew Carson (Putaruru) and Winston V Driene who picked up four in the treble in the opener.

Briar and Veroana took the last fence – a repeat of what happened to this talented combination at the Taupo World Cup round – to finish on four faults in 57.1 seconds. Brooke nudged a fence or two but kept her slate clear in 66.93 to win the final for the second time on the trot. Tegan uncharacteristically had a rail at the first but flew around to stop the clock at 56.82 for runner-up and secure the series – by just two points – for the second consecutive year. Briar placed third in the series, also replicating her result of last season. Both Brooke and Tegan admitting to relief the series was now over.

Twenty-nine-year-old Tegan was hugely proud of her warmblood gelding who continues to be so consistent. “He is the horse of a lifetime,” she said. “He felt on form in that first round, so I knew I just had to keep that up. It worked to my advantage having that first fence down as I knew I had to be second if Brooke won so I just put my foot down. He jumped so well – I am incredibly proud of him. It feels great to come out and win the series again.”

The combination were on the podium in four of the five World Cup rounds this season, including two wins. In winning the series, Tegan now has the opportunity to represent New Zealand at the world final in Las Vegas in April but says they’ll talk more about that when she gets home to her Canterbury base next week and have had a couple of days to breathe.
They’ve got a busy run heading to the end of the season with the Nationals, South Island Champs, Takapoto Estate and finally the Horse of the Year.

Brooke and LT Holst Andrea were the only combination to jump double clear today. “She tried really hard to jump two awesome rounds,” says the 29-year-old. “As long as I give her the best ride I can, she jumps her best and that is usually clear.”

Brooke prefers to focus on her own rounds and leave the competition to do the same. “I was relieved when it finished. I try to think of the final as just another class and not get caught up in things.” She paid tribute to the team effort that made their success possible and to course designer Gary Sinclair who had received a late call up after Australian Gavin Chester had to withdraw when he couldn’t get out due to the bush fires.