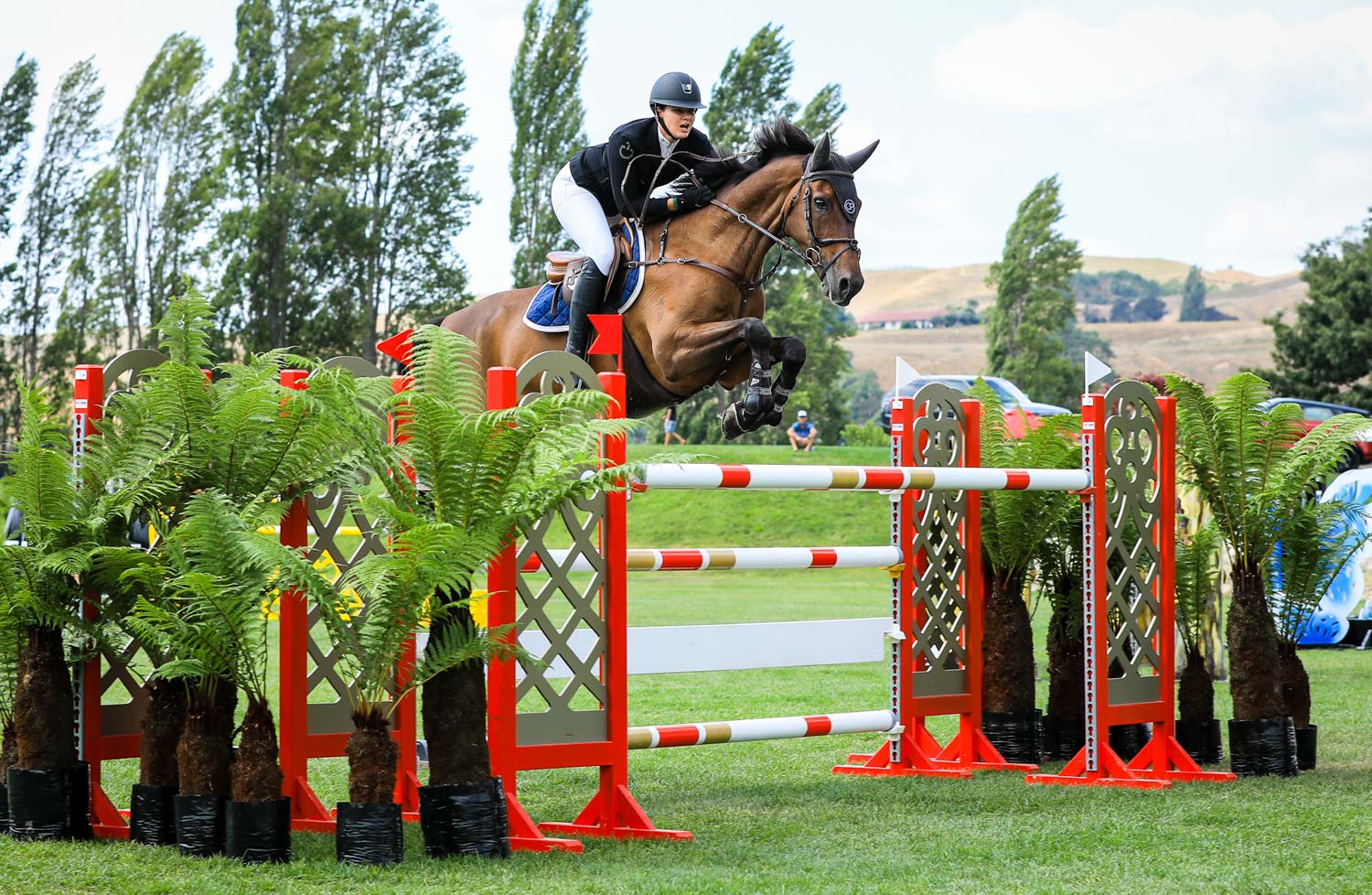 It was an Aussie trifecta in the Gold Tour Final on the last day of another hugely successful Takapoto Estate Show Jumping.
Twenty-four of the very best combinations from both sides of the Tasman tackled a beautiful and rather challenging Michel Ismalun (France) designed course. Seven combinations were clear – Australians Izzabella Stone aboard the Kiwi bred Lincoln MVNZ, Amanda Madigan on Diamond B Vivienne, Kate Hinschen with Finch Farm Cadel, Paul Brent and his lovely stallion Fontaine Blue VDL and Amber Fuller on CP Aretino. Sarah West (Matamata) aboard Oaks Centurian and Oliver Croucher (Cambridge) on Waitangi Surf were the only Kiwis clear in the opener, with Nakeysha Lammers (Taranaki) and her homebred horse Resolution coming through to the second round as the fastest four-faulter after an unlucky rail at the last.

Nakeysha was first out in the second and rode a brilliant clear to finish on a total of four faults from the two rounds. The next three combinations each bagged four faults. Then came Kate and Finch Farm Cadel who rode a cracking clear, stopping the clock at 52.11 seconds. Paul backed that up with a very forward clear round but fell slightly short with a time of 55.4. All the Kiwi hopes rested on the in-form Oliver Croucher who had a less than ideal start when his horse lost a shoe in the warm-up and had to be quickly re-shod. However, it wasn’t his day and Waitangi Surf dropped two rails to finish on eight faults.
It was an emotional win for Kate. “I am just so happy right now,” she said. The tearful 22-year-old who is based at Chatham Park in Sydney said she was lucky to have “the most amazing people” in her life, thanking the Douglass family who own Chatham Park, George Sanna, Amber Fuller and her father Barry.

Her team-mates told her to just go for it. “I went out all guns blazing and didn’t leave anything in the tank,” said Kate who was second in both the Gold Tour classes last year at Takapoto and was keen to go one better.“I am just over the moon. The horse was just so good today. It was a really sweet moment. The course rode really well and all the lines came up perfectly. It has been a great couple of weeks in New Zealand.” Kate has had Finch Farm Cadel for about four years and says he is a real sweetheart. “He’s a lot of fun.”

Amber Fuller took third place aboard CP Aretino with Amanda Madigan and Diamond B Vivienne in fourth despite a mishap at the last that saw her part company with the horse after crossing the flags. Sarah West the best of the Kiwis in fifth.
Course designer Michel Ismalun was very happy with the show. “I have loved it here,” he said. “The result (of the Grand Prix) was good. It was not an easy class – it looked it because the riders have improved. The Grand Prix is the Grand Prix and has to be well ridden.” He has no doubt Takapoto Estate Show will continue to go from strength to strength and is already looking forward to returning next year.

Sam Carrington and Colours of Lansing were the winners in the Pony Grand Prix taking the honours ahead of 21 other combinations. It’s Sam’s last season on ponies and her dad Rob was ringside to watch her take the win. Just three of the 22-starters came back for the jump-off. Missing out were three single time faulters who had gone oh-so-close to the 72-second time allowed. Coming back were Dan Harkerss (Kaikoura) and Cocamo who took had two rails to finish in 44.33 seconds. Next out was Sam who rode a very tidy round but had the first of the double down, crossing the flags at 43.63 for the win.
“She is just so clever,” said Sam of her 14-year-old mare. “She is a very special pony. I just wanted to go clear but not slow to put the pressure on Isabella and I just got a little deep at that fence.”

Tara Gower (Ohura) and Double J Image took the honours in the Copper Tour Final. The 13-year-old has only been with the horse since early January but have clicked so well. “She is just amazing and such a trier,” said Tara. “She has been a little rock star this show.”

Tara came into the final confident they would place, knowing the horse is fast and easy to turn. “The course was so twisty but it suited her well. To win just means so much to me.”

The Gold Tour Final brought the curtain down on two fantastic weeks of competition at the boutique show on the edge of Lake Karapiro.

For full results, head to www.equestrianentries.co.nz.