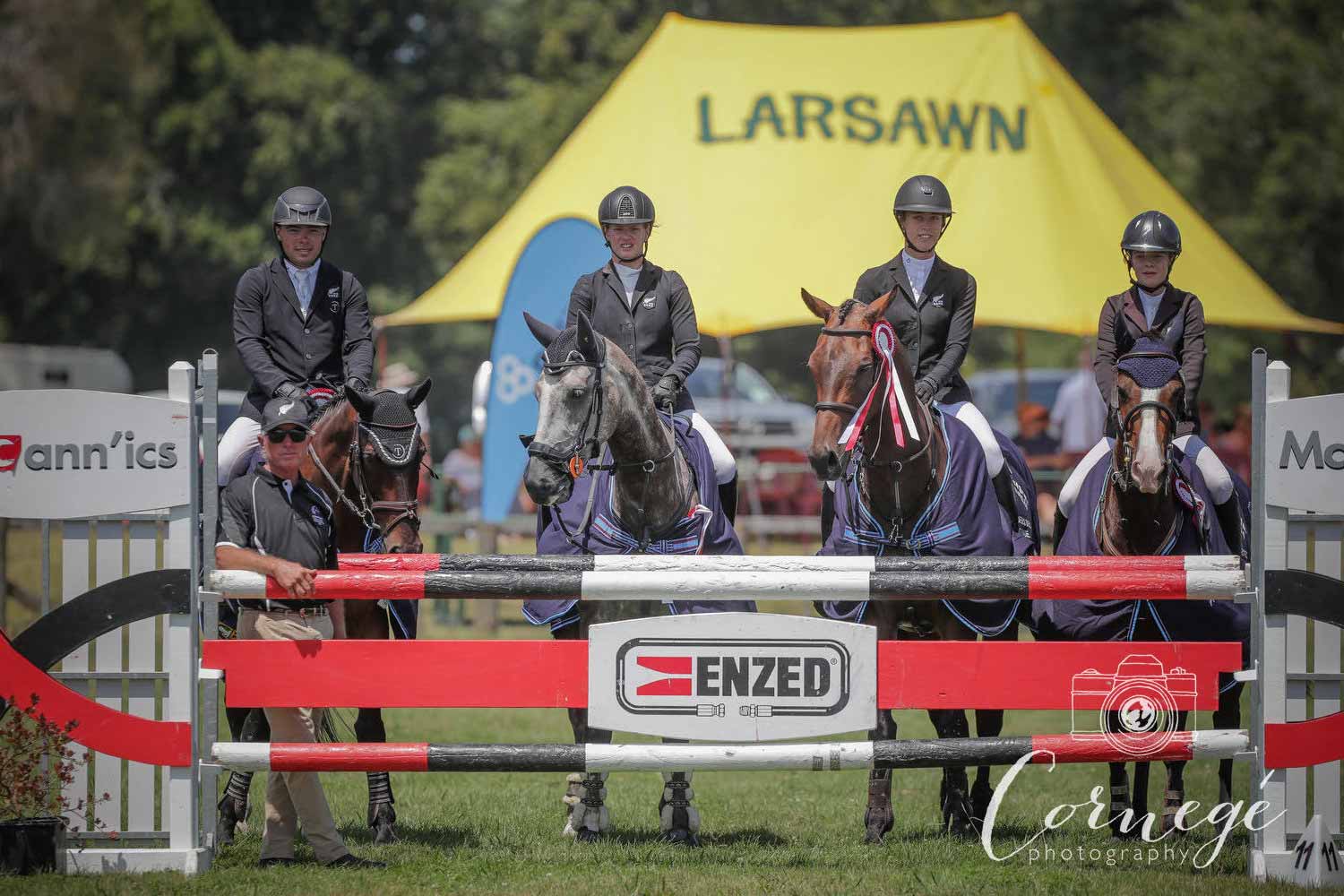 The New Zealanders ended up with 17 points from the three days of competition against their Australian counterparts, with the visitors on nine after finishing second each time. Captain Ally Carson (Putaruru) led from the front collecting just eight faults over the six rounds aboard three different horses, making her the cleanest rider in the event. She congratulated the visitors and said she was going home “as one happy kid”.

Competitors all rode borrowed horses for the annual competition with the equines switched between riders each day. Olivia Dalton’s Cheyenne was the best-performed horse with a clean slate throughout, earning a special prize from Matthews Hanoverians.

Today double clears came only from New Zealanders Emelia Forsyth (Clevedon) and Oliver Croucher (Cambridge). Kiwi chef d’equipe John Cottle was extremely proud of his team. “The Australians put up a great show,” he said. John is passionate about the continuation of trans-Tasman team events and was hopeful it would continue. “As riders, we all go around the country riding as individuals, it is nice to be in a team environment which brings with it a whole different situation.”

Australian chef d’equipe Todd Hinde extended a huge thanks to their hosts and the show. “It has been tremendous,” he said, adding he was now on a mission to ensure a reciprocal event across the Tasman later in the year. “I felt all the riders were outstanding, and the Kiwis deserved the win. Each of my riders represented our country so well and have been outstanding ambassadors. Cheyenne is an amazing mare to jump double clear all three days.”

Waipukurau rider Brooke Edgecombe finally got her wish today when she scooped up a garden seat and cash as the winner of the Equissage Horse Grand Prix. “I have been waiting for 25 years for this chair,” she said. Brooke and her extremely well-performed mare LT Holst Andrea were the only combination clear in the opening round of the Grand Prix and added a rather uncharacteristic rail in the second but still held on for the win.

It was the third Grand Prix win of the season for the 11-year-old mare, who earlier in January won the FEI World Cup (NZ) final and placed second in the series.

“It was tough enough out there,” she said of the Heather Macdonald-designed course. Brooke had plenty of praise for Andrea too. “She is really careful and brave and tries super hard every time.” Brooke took full responsibility for the mid-course rail in the second round.

Placing second to Brooke today was Melody Matheson (Hastings) aboard Cortaflex Graffiti MH, who stopped the clock at a super slick 52.43 seconds. It is the second consecutive year the combination has been runner-up in the big class of the show.

And the Country TV Pony Grand Prix went the way of Napier’s Tessa Mason in just her second start at that level.
The pint-sized Napier 11-year-old steered Mr Acho to a popular win over a sometimes testing course that left other far more experienced combinations languishing. Eleven combinations started the class with just six progressing to the second.
Tessa inherited Mr Acho three years ago from her sister Ruby who enjoyed plenty of success aboard him. “I knew I just had to ride the course and trust him – I knew he would jump it,” said the Sally Clark-trained youngster. “He could jump the moon you know.”

The win was a special one for Tessa. “I feel like I am following Ruby’s footsteps but she was 13 when she first started jumping Grand Prix and I am only 11, so it is a big achievement for me.” She has been jumping “forever” and loves nothing more than to be on her pony sailing over obstacles. “He’s really cool,” she says of Mr Acho. “It’s just his personality. Although he can be an angry pony, he has a great personality. I do love him.”

The classes brought the curtain down on the show’s three near-perfect days in Gisborne.